An animal lover has praised the RSPCA’s apprenticeship programme which kick-started his career and gave him his much-loved dog Sonny whose mum was rescued from a puppy farm.

Sam, from Wisbech, wasn’t sure what he wanted to do after he left school and so the 21-year-old, who has always been an animal lover, decided to start volunteering at the centre in Cambridgeshire to see whether he would enjoy the role. It didn’t take long before he realised this was what he wanted to do.

He started his apprenticeship in October 2019 to gain the qualification he needed to become an Animal Care assistant.

Sam said: “I liked that you could do your coursework at the centre rather than having to go to a separate college. I’m not a fan of coursework and being at a computer all day but it was good as it was so much more hands-on and it was based on real life experiences rather than made up scenarios which made it much easier.

“I would recommend the apprenticeship for people who don’t want to go to college, for those who maybe didn’t like school but want a career in animal welfare.”

Sam completed the apprenticeship in April last year and since then has been working as an Animal Care assistant on a fixed term contract.

He added: “My favorite part of the job is when the animals are rehomed. You see these animals come in who are neglected or in need of medical help but then you get to watch them transform and find a new home. Just seeing their journey from coming in to being rehomed is really rewarding.” 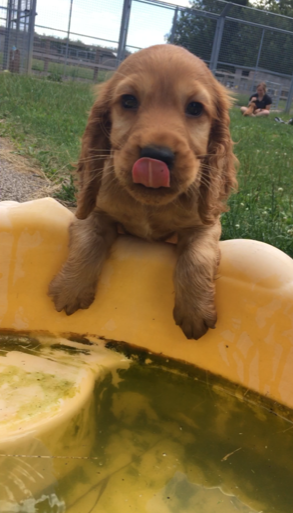 On a typical day, Sam’s job involves cleaning out the kennels, cattery and small animal units, making sure the animals have fun things to keep them entertained, and taking the dogs for a walk, providing any medication they need, as well as putting the pets details on to the RSPCA’s rehoming website and liaising with potential adopters.

As well as offering him the qualification he needs to progress his career, his apprenticeship also saw him introduced to spaniel puppy, Sonny. Sonny was born in RSPCA care after his mum was rescued from a puppy farm. Sam spent a lot of time with Sonny caring for him in the kennels and the two became very close. Not long into his apprenticeship, Sam adopted Sonny and he is now well and truly part of the family.

In the future, Sam hopes to continue working at RSPCA Block Fen Animal Centre and to continue his career in animal welfare.

This National Apprenticeship Week, the RSPCA celebrates the many benefits apprenticeships bring to the charity and the individuals.

The NatWest Group helped to extend the RSPCA’s apprenticeship programme with its £500,000 levy transfer. This means the charity has been able to provide even more opportunities for people like Sam to progress their career and play their part in helping the 100,000 animals which the RSPCA rescues every year.