Limited Time Offer: Buy One bag of any Salters dog food and receive a 150g bag of Salters treats FREE at checkout

A pair of dogs who were rescued at Christmas and spent more than 18 months in RSPCA care have finally found their waggy ever after.


Salukis Eve and Dasher were rescued with two other dogs by the RSPCA from the Essex area just four days before Christmas in 2019 after welfare concerns were raised and they were found living in a shed and being used for hunting.


Eve, Dasher, Angel and Tinsel were taken in by RSPCA Southridge Animal Centre, in Hertfordshire and cared for by staff over Christmas.


Southridge’s Cathie Ward said: “All four dogs were really nervous upon arrival and it didn’t seem as though they’d had much human interaction in their lives. They were underweight and had been suffering from diarrhoea but, thankfully, they were soon feeling much better.


“We always go the extra lengths to ensure the dogs have a nice day at Christmas but nothing compares to a loving home.”


“We found new homes for Angel and Tinsel within a few months but, sadly, Eve and Dasher proved more difficult to match with the right family.


It would take Eve, who is deaf, and Dasher 18 months to find their perfect match but, in June, they finally went to their new home with Kelly Coupland (39) and Scott Marshall (51) - and their ex-racing greyhound, Biscuit - in Staffordshire. The couple decided to look for another pooch after losing their 16-year-old Saluki cross, Fawn, in February.


Kelly said: “Salukis have so much sass and character. They want to be the centre of the universe and I just love that so I knew I wanted a dog with a bit of Saluki in them and then we spotted Evie and Dasher! They have settled in really well especially considering how long they were in kennels. Evie loves to be with somebody a lot of the time so she loves to sit on the sofa with me. Dasher is a bit more timid. He can be scared of his own shadow sometimes but he’s getting better and when he gets excited he can’t keep his paws still and just dances around.”


The couple have been training deaf Evie with hand signals and take care to ensure they don’t startle her. Both dogs can be nervous of roads and traffic so they take all three of their dogs on long countryside walks. 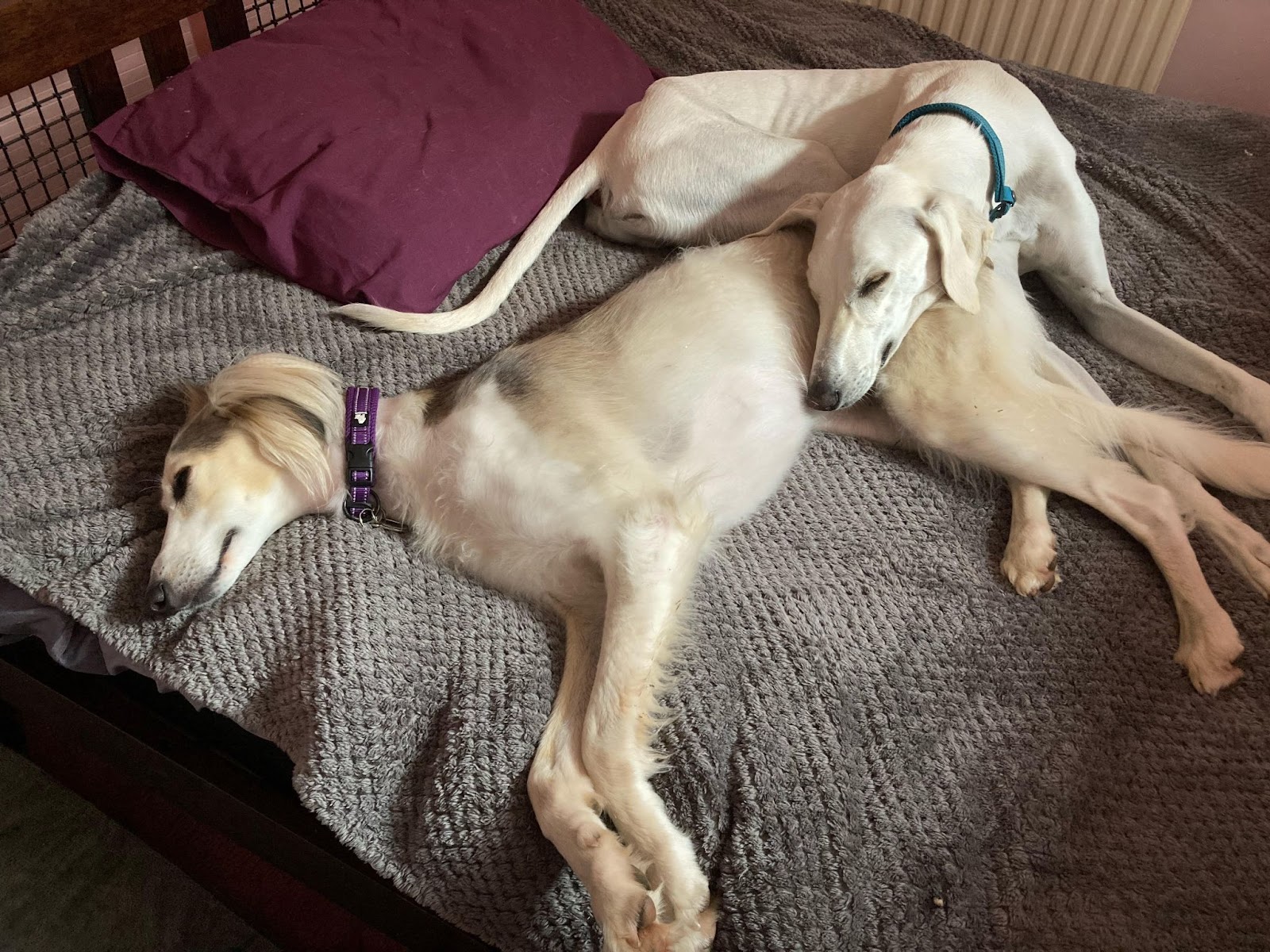 Kelly said: “They are lovely dogs and we’re so lucky to have them!”


This Christmas will be very different for Eve and Dasher, who will spend it - for the first time in their lives - in a loving home.


“They will all be getting their own doggy-friendly advent calendars and will have to pose nicely for photos so we can make our own Christmas cards!” Kelly added. “I usually cook a ham and prep some of the food on Christmas Eve so I’m sure they’ll have to check the ham has been cooked properly and I expect some of the pigs-in-blankets and veg will end up in their bowls as a festive treat!


“All three will get their own stocking filled with presents, we’ll head out for a lovely walk and they’ll get a very special Christmas dinner for their tea too.”


Kelly, Scott and Biscuit are all smitten with their new family members. Kelly said: “Evie is such a lovely girl and is so affectionate; she likes to cuddle up on the sofa and, I think because she’s deaf, she likes to feel that you’re there. The world is her playground and she’s into everything! She jumps up at the wall to pull down the stockings; she’s probably never seen them before!


“Dasher was so timid when he first arrived but he’s relaxing more and more every day. He has started to cuddle up to me on the sofa and is a truly lovely boy. It’s so nice to see him finally coming out of his shell and show his cheeky side.


“I’m really happy that they’ll finally get a Christmas in their forever home and will be spoiled rotten but it does really upset me to think that there are still lots of doggies out there that won’t get the Christmas they deserve.”

To Join the Christmas Rescue and help our rescuers be there for the animals in need this winter, please visit www.rspca.org.uk/rescuexmas.