Three members of the same family from Greater Manchester have appeared in court in connection with wildlife offences, hunting wildlife with dogs, and keeping dogs in poor conditions.


Leigh Jnr changed his plea to guilty and admitted seven offences at the start of the trial. Magistrates’ heard evidence in respect of Leigh Snr and Carding, convicting them of two and five offences respectively. The case was adjourned and all three will be sentenced on 9 March.


The RSPCA and Cheshire Police launched an investigation after a police rural crime officer was contacted anonymously, in October 2020, about posts and photos that had been posted in a private Facebook group. The posts, by Leigh Snr, suggested he was looking to take his son out badger baiting to celebrate his release from prison.


RSPCA officers worked with the police, who secured warrants for two addresses in Greater Manchester which were executed on 26 October. Six dogs were removed and taken into RSPCA care and a number of mobile phones were also seized and forensically examined, revealing videos and photos of dogs engaged in hunting and fighting with wild animals such as badgers and foxes.


RSPCA inspector Kirsty Withnall, a case officer for the charity’s Special Operations Unit and lead investigator for Operation Cricket, said in her witness statement: “Upon interrogating the phones, it was discovered that recordings had been made of extensive and graphic badger and fox persecution. It also became apparent that Leigh Jnr’s partner, Paris Carding, was present during these recordings. She was responsible for taking the footage, was heard encouraging both Leigh Jnr and the dogs during the attacks and was completely complicit.”


At one property, Leigh Snr was arrested by police and officers found a kennel block, in the back garden, containing six dogs, three of which were recognisable from the videos. Two black patterdale terriers had scarring on their faces and one was underweight; three bull lurcher types - one called Mission - also had facial injuries; and a white and black terrier - called Clover - had fresh wounds and a swollen face and muzzle. 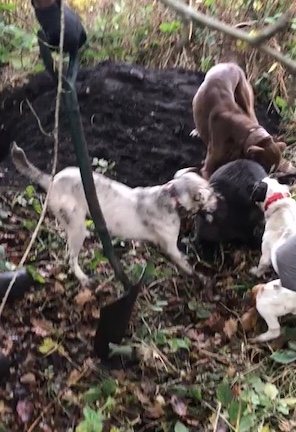 Clover and Mission were seen on the videos from the phones being used to hunt and fight wildlife just two days before they were seized.


Inspector Withnall said: “[Two of the kennels] were filthy dirty. Kennel E had a container which appeared full of faeces.”


An independent vet who attended the scene said in his report that the kennels were ‘unhygienic’ and described many of the dogs as having ‘mature scars’.


Two of the dogs - Buster and Shay - were rehomed. Clover and Mission were said to belong to Leigh Jnr while the other two dogs - Rocky and Bronco - had been brought from the internet.


A third warrant was executed on 23 December 2020 at Carding’s address and a terrier, called Foxy, who had been seen in videos on the mobile phones, was seized and taken into RSPCA care. Carding said Foxy did not belong to her so he was rehomed.


The vet report added: “All seven dogs had evidence of skin scarring and with the exception of one all dogs had injuries to, or had missing teeth. These findings are commonly encountered when a dog has been fighting with another animal of similar size and stature.”


He said two of the dogs had evidence of de-gloving injuries to the chin/jaw, concluding: “In my experience a de-gloving injury of the chin is commonly  encountered when a dog fights with a badger.”


PC Jim Clark from Cheshire Constabulary’s Rural Crime Team said: “This investigation uncovered a horrific catalogue of abuses and neglect of animals and cruelty to wildlife. This result reinforces our determination to work with our colleagues at the RSPCA to deter this type of behaviour as part of our commitment to protecting our rural communities.”