A dog who was badly injured after being hit by a car has bounced back from his broken leg to learn to play football again; inspired by England’s huge 10-0 win over San Marino.


One-year-old Sam is a cheeky rottweiler cross collie who was rushed into the RSPCA’s Finsbury Park Hospital in London in April as an emergency after being hit by a car. He needed urgent treatment after suffering from a broken leg before returning home with his owners.


Sadly, he came back into the RSPCA’s care in June when his injury became infected and his owners were struggling to afford treatment. He was signed over to the charity for treatment and rehoming.


Now, fully recovered, Sam is being looked after at Millbrook Animal Centre, in Surrey. Deputy manager Liz Wood said: “When Sam first arrived here he was traumatised by what he’d been through; he was terrified of being handled and that made his treatment very difficult and stressful for him.


“We couldn’t even put a harness or lead on him as he was so frightened so we had to spend months very gradually and carefully gaining his trust. We gave him lots of TLC and were extremely patient with him as he learned to trust us and get used to new types of experiences.


“Now, he is very friendly and sociable with people and with other dogs; he loves everyone he meets. Because of the bad start he had in life, we’re looking for a patient and experienced owner who, ideally, has experience with large breeds and can help Sam navigate his new life.


“He absolutely loves to play football, is very playful and has lots of energy so he’d love a fun, active home where he can enjoy spending time with his new family and going on adventures.

“There was a time where we thought he may never be able to run and play football again due to his severe injuries and his fearful nature so it’s so lovely to see him charging around with the ball in his mouth now!”


Inspired by England’s 10-0 thrashing over San Marino, the Millbrook team took Sam out for a special game of footie and they’re hoping that his premier ball skills will help him score a goal and net the best home possible! 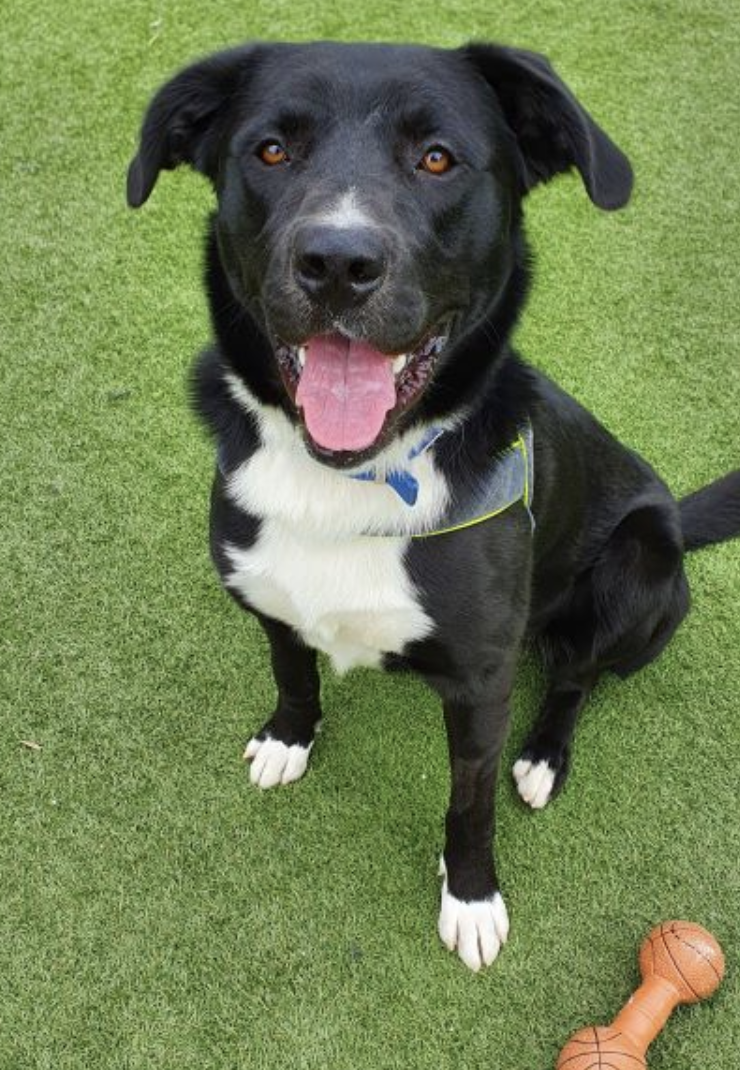 Sam is a big lad and can be strong on the lead so will need owners who can help work with him in this area. He loves to socialise and walk with other dogs but we feel he’d be best as an only dog as he continues to recover from his injury.


His new owners will have to slowly build up his off-lead exercise to help with his recovery. Sadly, he’ll likely always need restricted exercise to ensure his leg does not cause him serious issues so his new owners will need to make sure they can keep him mentally stimulated. Owners also need to bear in mind that his leg will not be covered by insurance and he could have some problems with it in later life.


We feel Sam will be best in an adult-only home due to his nerves around handling, and without other pets like cats or dogs. He finds it scary going to the vet so his owners will need to help him with this and get him used to travelling in the car and going to the vet. He’d like a private, enclosed garden without stair access and will need 6ft fencing as he’s a big lad! He’d like a quiet, calm home and someone who is based at home for most of the time.


Find out more about Sam on Find A Pet or contact the team at Millbrook on millbrook@rspca.org.uk.