Labrador who had never ever been on a lead is rescued from puppy farm and has now transformed into a crime-fighting police dog!

A young Labrador who started life in ‘horrific’ conditions on a Welsh puppy farm has made an incredible transformation and is now helping to fight crime in Gloucestershire.


Bonnie was just six-months-old when she was rescued, alongside her mum who also had two tiny one-day-old puppies, from a travellers’ site in South Wales in March 2021 as part of an RSPCA operation.


A total of 21 dogs were removed from the address, as part of a warrant executed by South Wales Police, after they were found to be underweight, suffering from skin conditions, and were living in unhygienic and hazardous conditions.


Some of the dogs who were seized were signed over - including Bonnie - so they could be rehomed. Bonnie was taken in by the RSPCA’s West Hatch Animal Centre, in Somerset, where staff - who have a history of successfully rehoming more than 20 rescue dogs of all breeds to police forces - quickly identified her potential.


She, and fellow RSPCA rescue dog spaniel Marshall, joined Gloucestershire Constabulary and were both fostered by experienced dog handler PC Claire Todd to spend time with her and her veteran police dog (also an RSPCA rescue), PD Stella the Staffie.


She started her training in November 2021, qualifying as a proactive cash, drugs and firearms search dog in December before hitting the streets in the New Year, as one of four new recruits in the unit, all of whom were rescue dogs.


RSPCA Inspector Gemma Cooper, who rescued Bonnie and investigated her case, said: “I was horrified by the animals’ overall health condition and the environments in which they were being kept. It also appeared that a small-scale puppy farm was being run from this location.”


The dogs were being kept in filthy makeshift kennels and runs, some in shipping containers, and many without appropriate bedding, food or water.


She added: “The conditions they were kept in were not acceptable and the owners were failing to meet their needs. One pen for example - which had eight dogs in - had no space for them to get away from each other, had no comfortable area for them to rest and was full of urine and faeces. 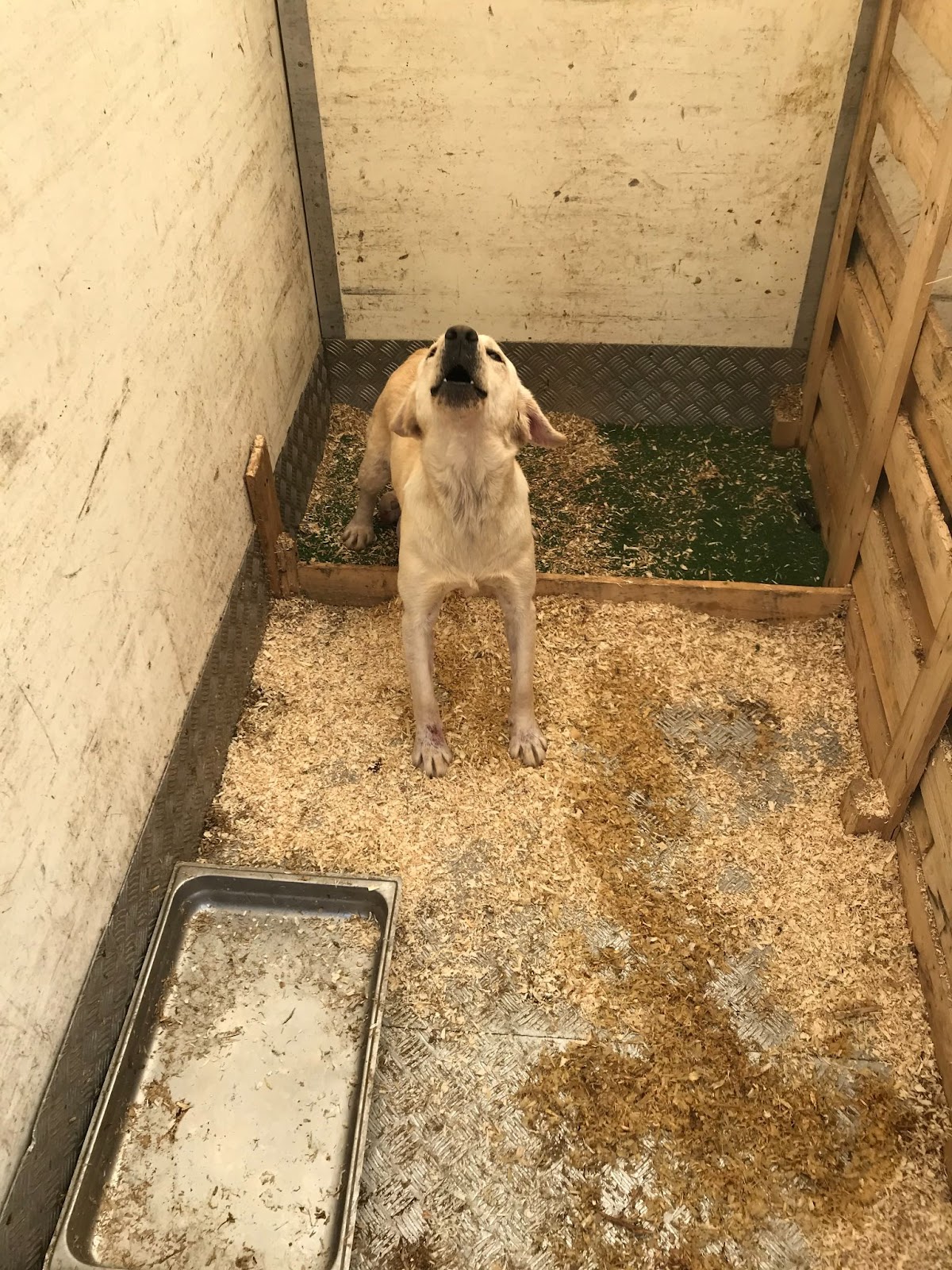 “Temperature control was lacking in all the pens as was clean, comfortable bedding and all the pens looked and smelt dirty. Also there were no sufficient beds and water bowls for the number of dogs to prevent competition and all the adult dogs needed veterinary treatment for various ailments.


“When bringing the dogs out of the first two pens none of them knew how to walk on a lead and they were all terrified of the outside world. It was clear from their reactions that they have not been properly socialised and spend the majority of their time locked up in these pens and away from life.”


Bonnie’s previous owners - a man and woman from south Wales - were taken to court and given suspended prison sentences, community orders, fines and disqualified from keeping dogs for 10 years, after pleading guilty to three offences under the Animal Welfare Act* on 11 February.


While sentencing, the District Judge referred to there being a commercial element on what appeared to be a puppy farm.


PD Bonnie’s handler PC Rich Hunt - who is also the Gloucestershire Constabulary dog training instructor - said: “Bonnie joined the fire service and was being tested as a recovery dog to go into fire-hit buildings and rubble to search for people.


“Unfortunately she didn’t like going into dark, confined areas so she failed. It doesn’t surprise me knowing where she had been rescued from and what her early-life experiences were.


“We had contacts in the fire training programme who asked if we’d be interested in trialling her for the police and she was brilliant!”


She is trained to search for all types of drugs, firearms and ammunition, and paper cash - both pounds sterling and Euros. She will search anywhere from properties and cars to parks and schools. 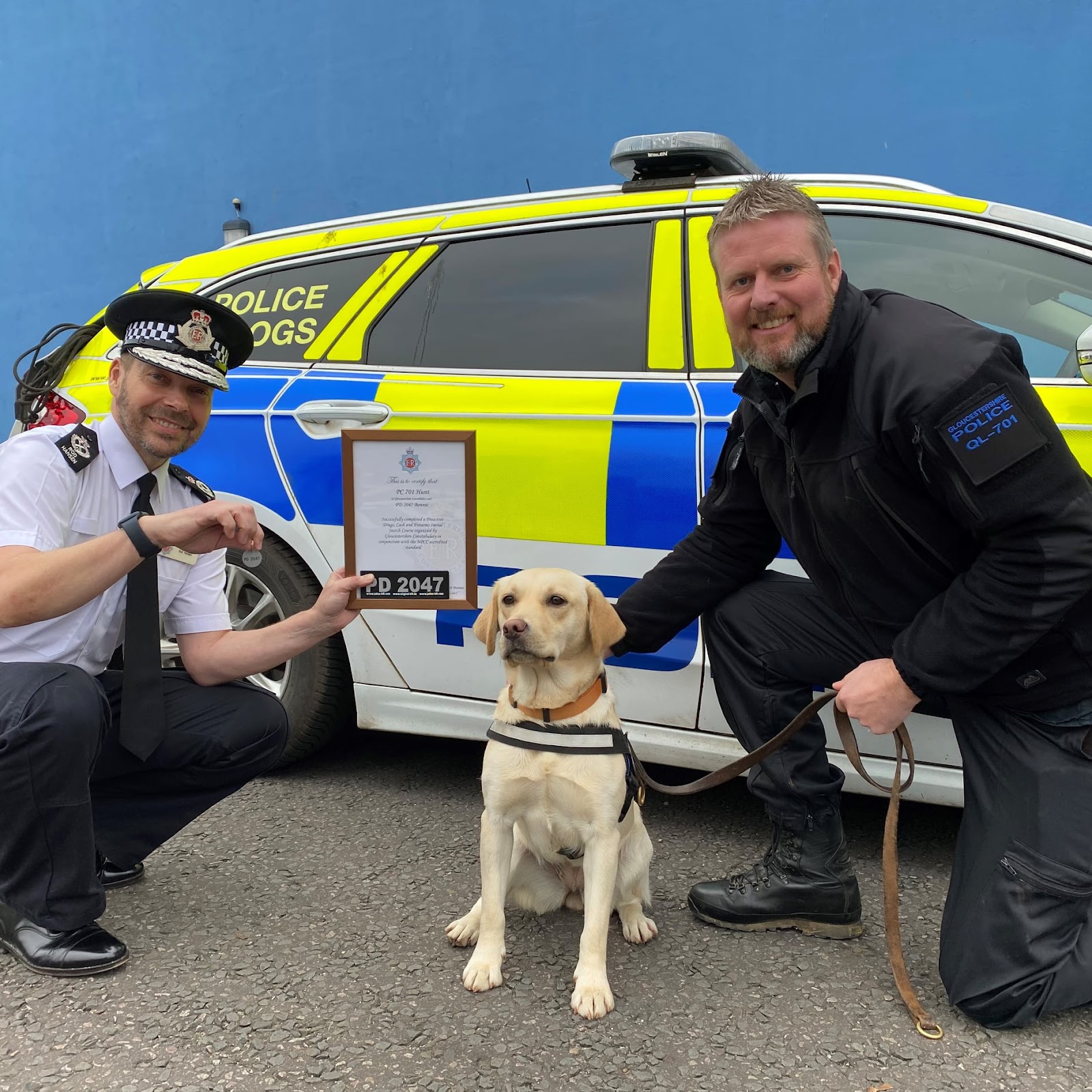 “Bonnie is so loving and friendly, it’s amazing when you think about the awful start she had, but she’s so happy now,” PC Hunt added.


“She’s great at her job because she loves a tennis ball and her drive for play means she has a great drive for work; it’s a big, fun game to her!


“She has a wonderful work ethic because she loves it. Soon we’ll be busy doing drug searches, warrants and supporting the police in their work.”