Cheshire branch delighted to rehome one of their longest-staying canines 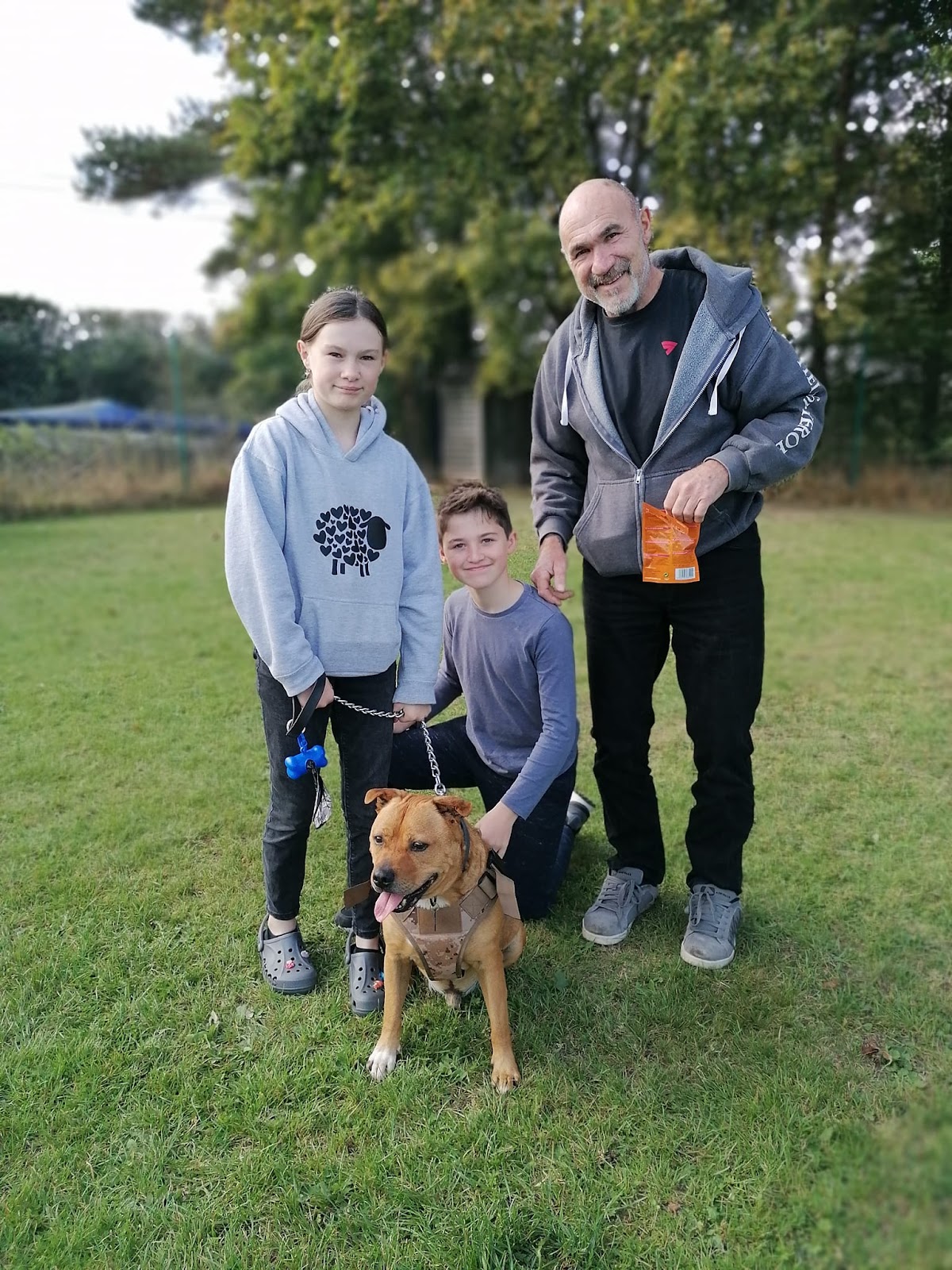 A dog who chalked up nearly 300 days in the care of the RSPCA has found his forever home.

Bruce, a bundle-of-energy Staffie cross with a friendly personality, struck up a lasting friendship with volunteers at the RSPCA Crewe, Nantwich and District Branch over two separate stays.

But despite their affection for Bruce, they were saddened to see him return to their boarding kennels in south Cheshire earlier this year when a previous adoption faltered after seven months.

They had spent hours training the 11-year-old Staffie, who spent part of his earlier life living in dog crates in a neglectful environment, before arriving at the branch in March 2021 with two other Staffies, Alaska and Terry.

So they were delighted when foster carer, Steve Young, confirmed Bruce would be staying permanently with him and his family at his home in Swadlincote in Derbyshire.

Steve (pictured right with his children, Isobella and Lochlan) says the foster trial was just for Bruce’s benefit to make sure he was settled as he had already made up his mind to become his owner.

He was smitten after travelling to Cheshire to meet Bruce after his profile popped up on a YouTube video he was watching. The social media algorithms played their part after the branch made a special appeal for a foster carer to come forward because the Staffie was looking so sad.

Steve recalled: “I had been looking on national rehoming sites. I’m a fan of German Shepherd dogs, but I was looking for a Staffie or a French bulldog and Bruce’s name came up when I did a search for dogs at the RSPCA. 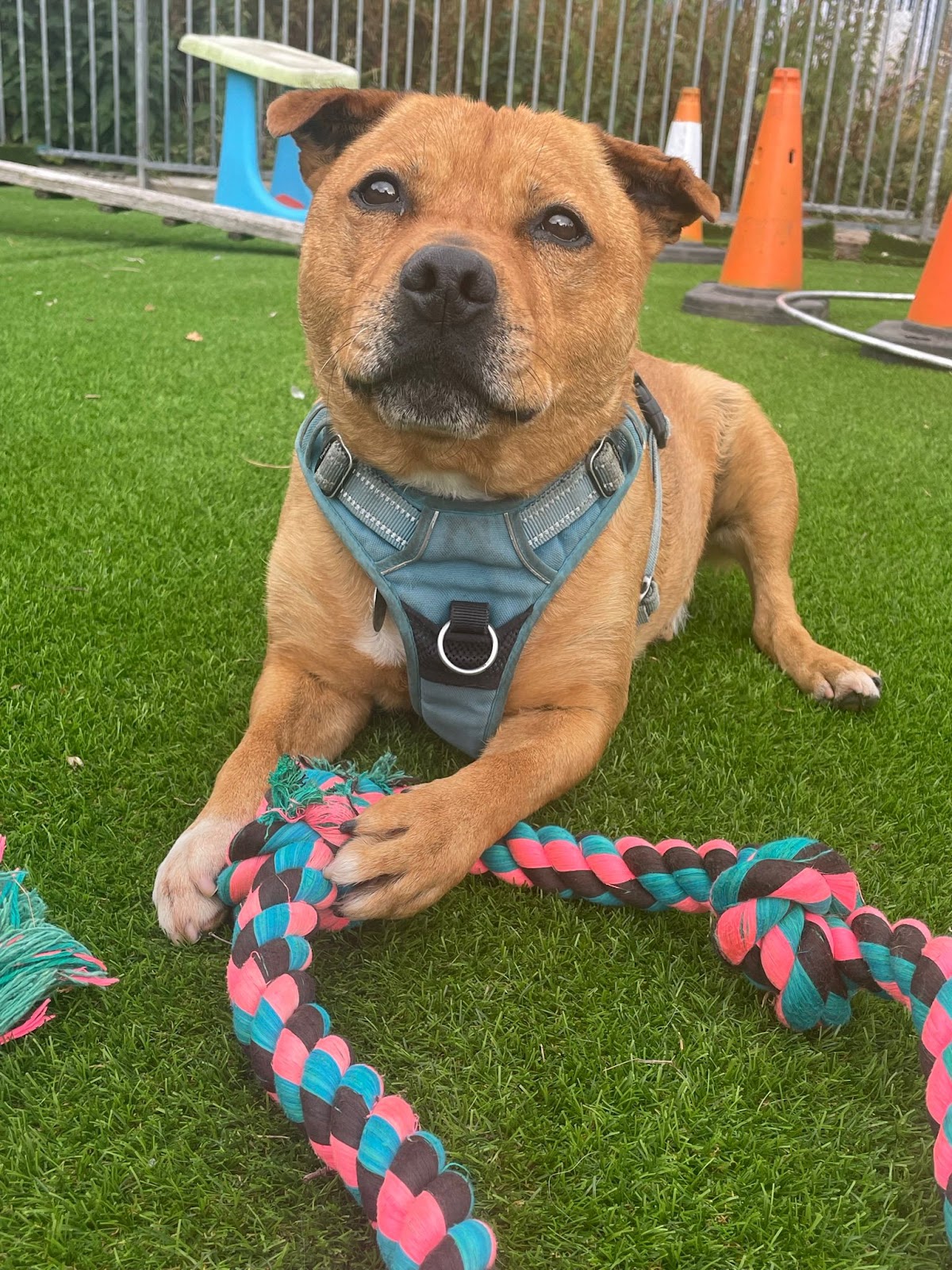 “Then he popped up again when I was looking through YouTube. It must have been fate and I took him home to my two kids and they just loved him. He’s a diamond and such a loving dog. I don’t know how he’s been treated in the past and we know he doesn’t get on that well with other dogs, but we are very aware of how to handle him and we plan his walks carefully.

“For example, I take him to the park early in the morning when there isn’t anyone around.”

Bruce’s adoption comes as the RSPCA launches its rehoming drive, Adoptober, this month to raise awareness of some of the animals in the charity’s care who are desperately in need of a forever home and a chance for a new life.

Rehoming is slowing at a time when the RSPCA is bracing itself for more animals coming into its care as the cost of living crisis puts a strain on people’s finances.

RSPCA Crewe, Nantwich and District Branch has a track record of patiently accommodating long-stay dogs, like Bruce, but Angela Chan, the branch’s dog rehoming coordinator, says they are finding it tougher to find suitable homes.

“Our long-stay dogs just need patience and owners who are prepared to work around any issues. We always say that the right person is out there for any dog,” she said.

For Bruce, who was adopted on September 17, after initially spending a month with Steve and his family, life is now looking up.

“We were going to adopt him straight away, but I said we’d foster him to make sure that he was happy with us and his surroundings. That was important to us,” added Steve, who was briefed on Bruce’s past difficulties.

“Angela gave me some herbal calming tablets for him when he first came to us. But by the third night with us he’d found his way up to my bed and he had made himself at home. In fact, he’s got three beds in our home, one by the door and there is a dog bed by the stairs as well.

“He’s really settled in and you can see how happy he is. He talks to you and he loves to play, while he has really hit it off with Isobella and Lochlan.

“It is sad to hear the branches are struggling to place dogs and the financial situation isn’t helping. People don’t realise a dog is for life and they need to do their research.”

Angela added: “Bruce is the perfect dog, it was just that he didn’t particularly like being around other dogs. But I don’t think being dog reactive should put off people who really want to take on dogs like Bruce and show them commitment. As Steve has said, it is possible to work around the issue, and so worth the  effort 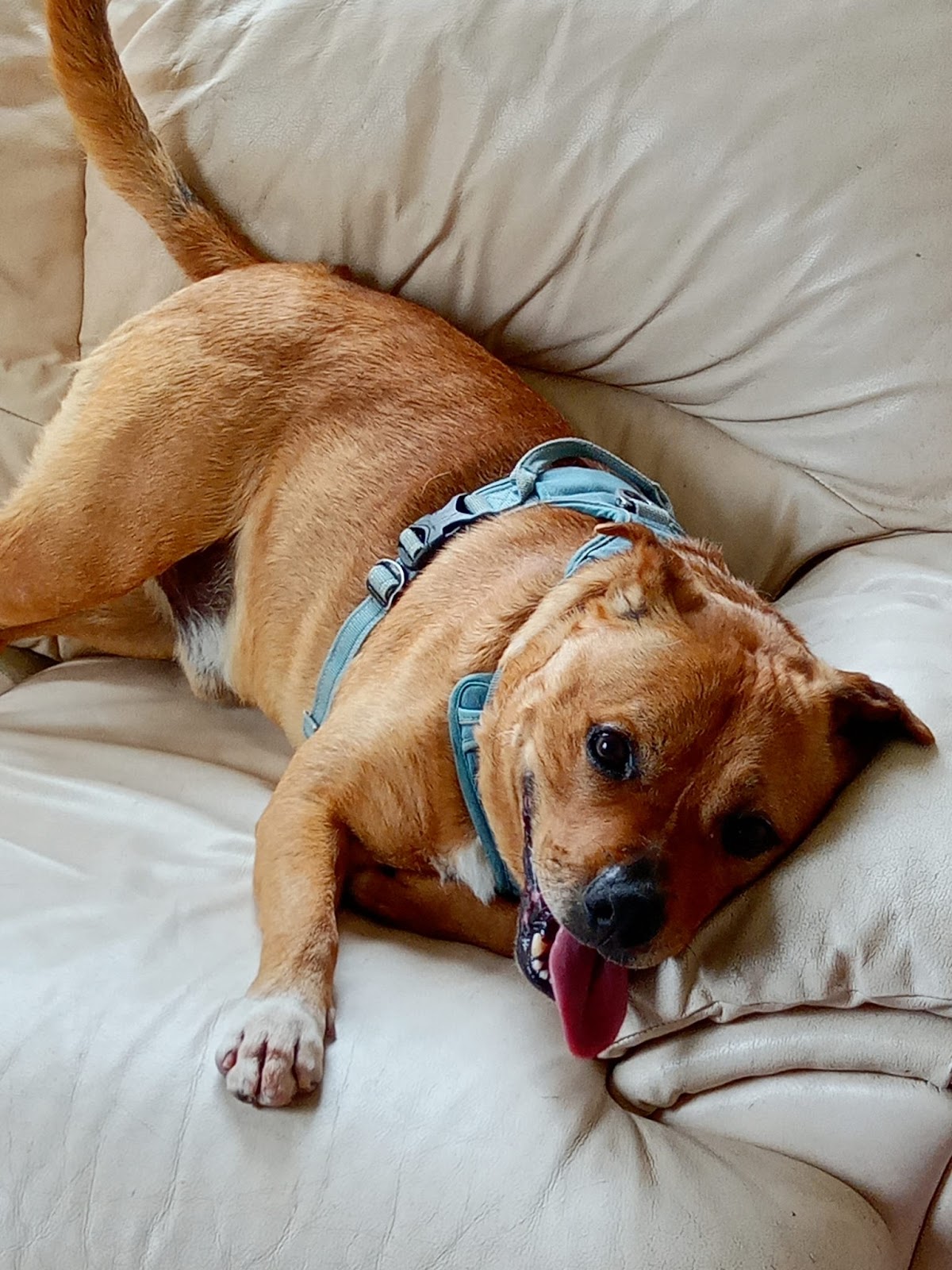 “We are just so overjoyed that Bruce has found a loving new home as he had been with us for so long.

“We’ve recently rehomed two Patterdale terriers who were with us for four months. Generally though, our dogs tend to stay with us longer. We have a German Shepherd called Rocky who has been here since November last year and we are hopeful of soon rehoming a Border Collie, Ralph, who has been with us for a year.

“Both Rocky and Ralph need extra special homes, which we are committed to finding for them. They are both fabulous companions and deserve the extra effort.”

All the dogs in the care of RSPCA Crewe, Nantwich and District Branch are neutered and are subject to stringent health checks before they are rehomed.

If you are considering fostering a dog such as Bruce then all expenses are covered by the branch and you can email dogrehoming@rspca-crewenantwich.org.uk or ring 07748 400919.

Could you offer a rescue pet a loving new home? Please visit Find A Pet to see all of the animals currently in our care who are looking for their paw-fect match.

If you can’t offer a rescue pet a new home perhaps you could help in a different way?