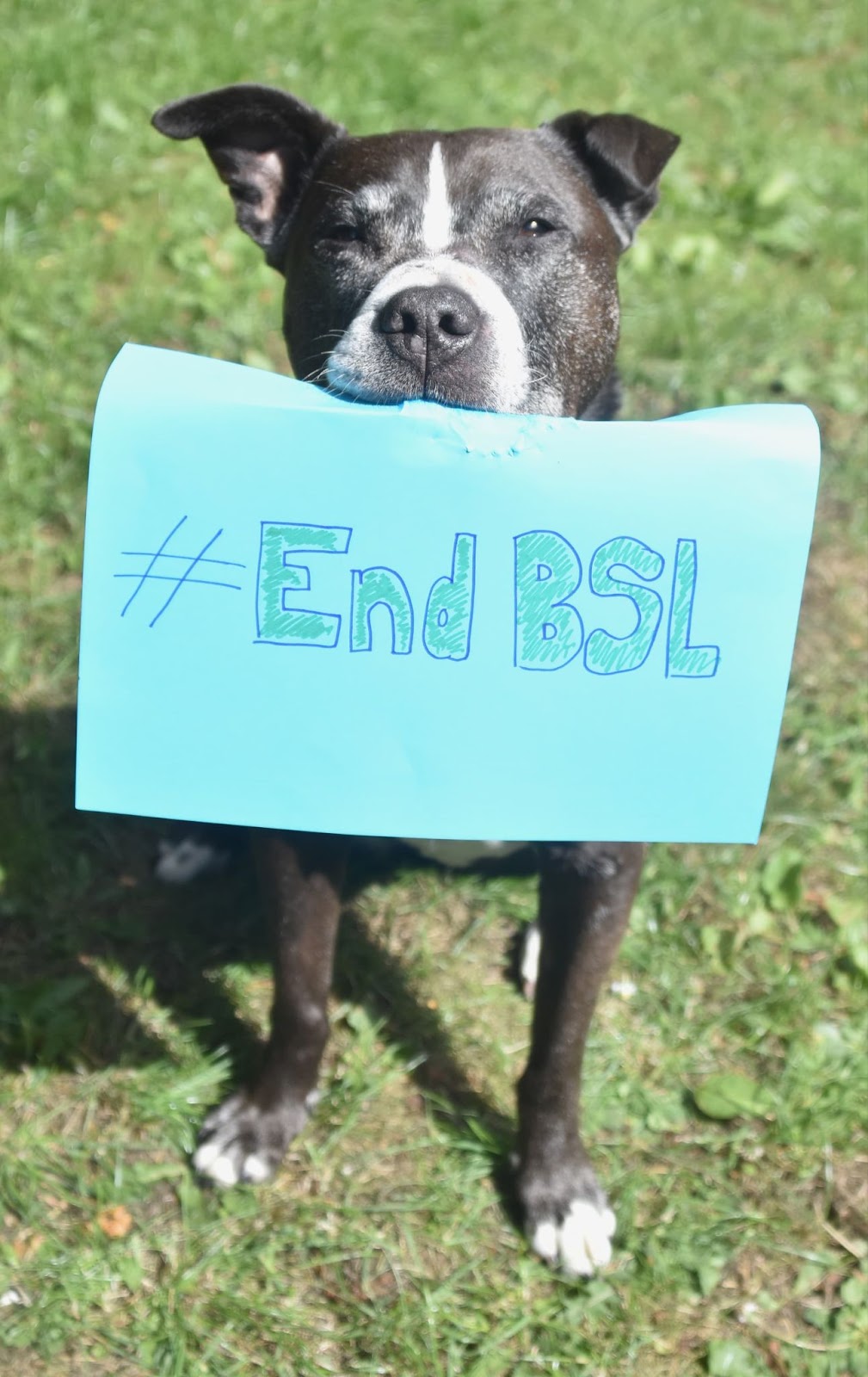 The UK’s leading animal welfare and veterinary organisations have joined forces to urge the UK Government to repeal breed specific legislation (BSL) - that ‘sentences dogs to death’ simply because they look a certain way - and introduce measures to protect the public better.

Battersea, Blue Cross, British Veterinary Association (BVA), Dogs Trust, The Kennel Club, RSPCA and Scottish SPCA have all teamed up as the Dog Control Coalition to throw their weight behind the #EndBSL campaign.

Friday (August 12) marks the 31st anniversary of the Dangerous Dogs Act; legislation that was introduced in 1991 following a number of serious dog attacks in the UK. While there are parts of the Act that, importantly, protect the public from dogs who are dangerously out of control, the UK’s biggest welfare and veterinary organisations are calling for urgent change to one part of the law which labels certain types of dogs as dangerous purely based on their looks.

Critics of the law - including the country’s leading dog welfare groups, veterinary bodies, dog owners and the public - want BSL repealed and replaced with legislation that better protects public safety and dog welfare, and allows better education to keep people safe around dogs while allowing early intervention to help dogs with behavioural concerns.

A review of dog control policy and legislation in the UK by the Environment, Food and Rural Affairs (EFRA) Committee in 2018 and independent research commissioned by the Government and published by Middlesex University last year also cast further doubt on the basis of BSL, adding more weight to the #EndBSL campaign.

RSPCA #EndBSL campaign manager, Shelley Phillips, said: “We shouldn’t judge a book by its cover; but that’s what BSL does. It says that dogs who look a certain way are more likely to be aggressive or dangerous than other dogs. This is completely unfair and untrue, and also lulls the public into a false sense of security that only certain types of dogs can bite. 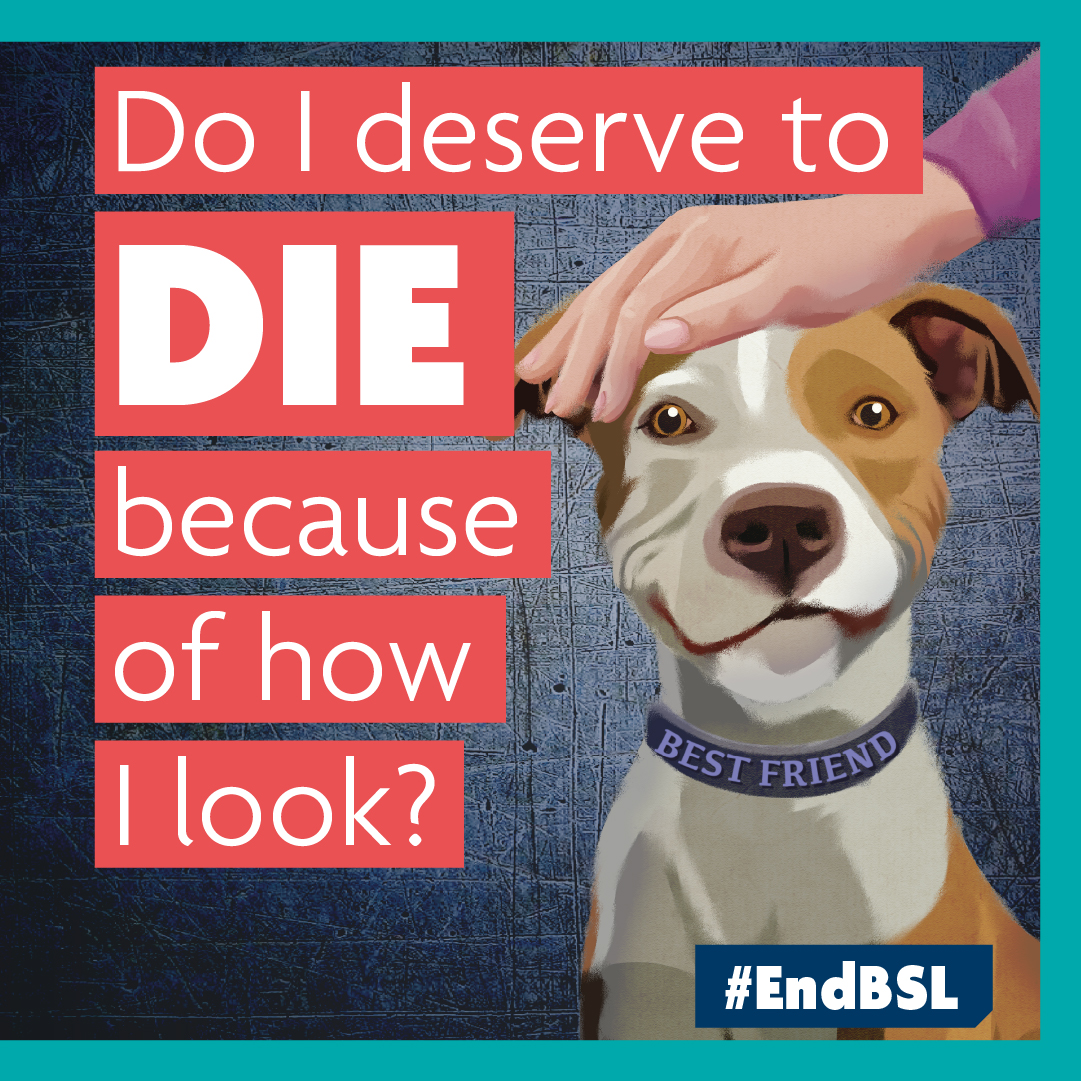 “There’s no robust scientific evidence to suggest that these types of dogs are more dangerous, more likely to use aggression or have a unique bite style that could cause more serious harm, than any other type of dog.

“We need to move away from outdated, ineffective legislation that sentences dogs to death because they happen to look a certain way, and we need to focus on helping dog owners be responsible, providing support to dogs who have shown early signs of behavioural difficulties, and educating the public on how to safely interact with dogs. These dogs don’t deserve to die.”

What is breed specific legislation? 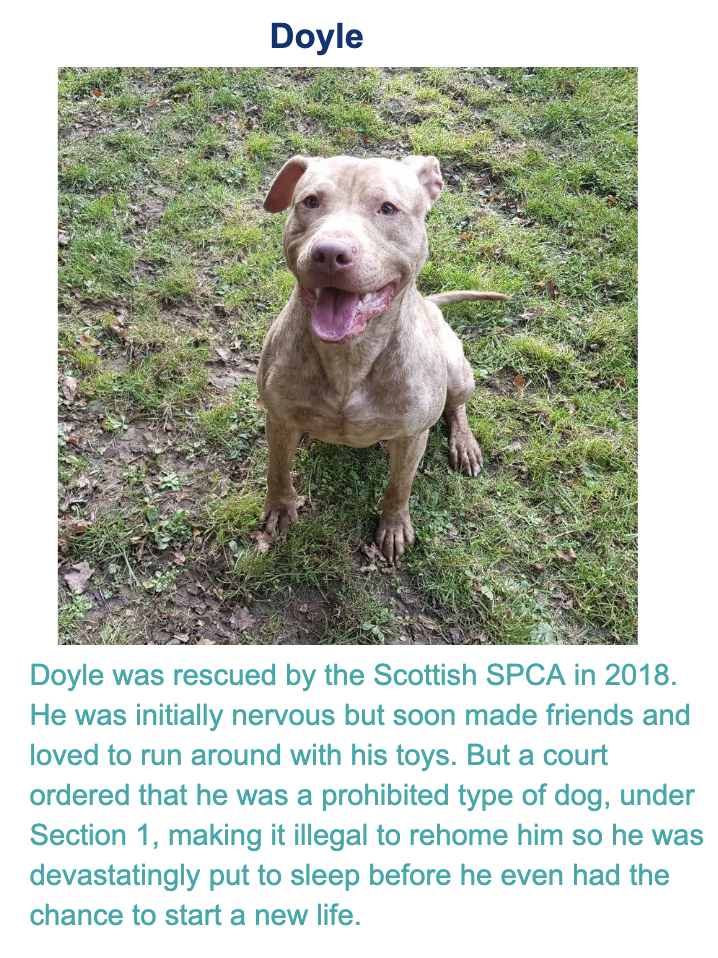 If a dog is suspected of being of banned type they will be assessed by a police dog legislation officer against a list of criteria. If they are identified as being of a prohibited type then their owner must apply to have them exempted through the courts (like the dogs in our video) and, if approved, must adhere to a strict set of rules such as always keeping them on lead and muzzled when in public.

These dogs cannot be rehomed - meaning rehoming organisations like Battersea, Blue Cross, the RSPCA and Scottish SPCA must heartbreakingly euthanise them - and their ownership cannot easily be transferred to someone else should an owner be unable to care for them.

Battersea chief executive Peter Laurie said: “We have long been calling for a complete overhaul of the law around banned breeds. For 31 years this ineffective legislation has unfairly punished thousands of innocent dogs and ultimately failed to protect the public. We are urging the Government to review this legislation and make it fairer and more effective for humans and dogs alike.”

Dogs Trust CEO Owen Sharp said: “Dogs seized under the Dangerous Dogs Act can spend protracted periods of time in kennels during the court process, often in poor conditions, and too many healthy dogs are put to sleep because they are prohibited and cannot legally be rehomed. 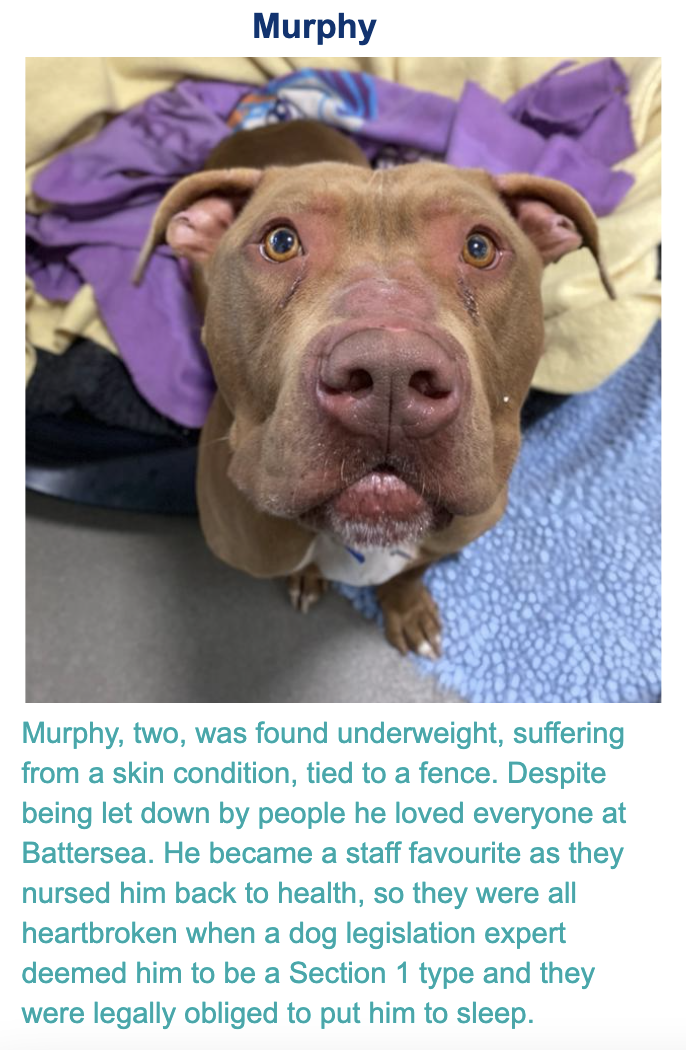 “We believe in ‘deed-not-breed’; dogs should not be judged on what they look like and should have the chance to live a happy life, free from the threat of unnecessary destruction.”

While the main aim of the Dog Control Coalition is to see the repeal of BSL, the group is urgently calling on the Government to change the law with regards to the rehoming of typed dogs - as recommended by the EFRA Committee to avoid the unnecessary euthanasia of happy, friendly dogs.

Blue Cross CEO Chris Burghes said: “Another year passes and we have seen no progress on a repeal of Section 1 of the Dangerous Dogs Act and more innocent canine lives lost. Academics, policy makers and charity experts are all in agreement this legislation has failed for the 31 years it has been in force. Section 1 dogs continue to be demonised and euthanised on looks alone.

“I hope this anniversary serves as a wake-up call to the Government to make the urgent changes that have been requested for so long, such as giving animal welfare charities powers to rehome Section 1 dogs and undertaking a review of all dog control legislation.”

Dr Ed Hayes, head of public affairs at The Kennel Club, said: “Any dog can be a wonderful pet if trained and socialised properly, and demonising certain types of dogs is not only unfair, it is also dangerous. Breed specific legislation has failed to reduce the number of dog bite incidents, and has only served to make certain breeds of dogs more desirable to the wrong types of people, proving that action should instead focus on prevention and ‘deed not breed’.”

Scottish SPCA chief superintendent, Mike Flynn, said: “While we fully support legislation to protect the public, we believe any breed of dog can be potentially out of control and dangerous in the wrong hands. We’d like to see a bigger focus on legislation that ensures responsible dog ownership rather than punishing individual dogs for the way they look if they haven’t harmed anyone.” 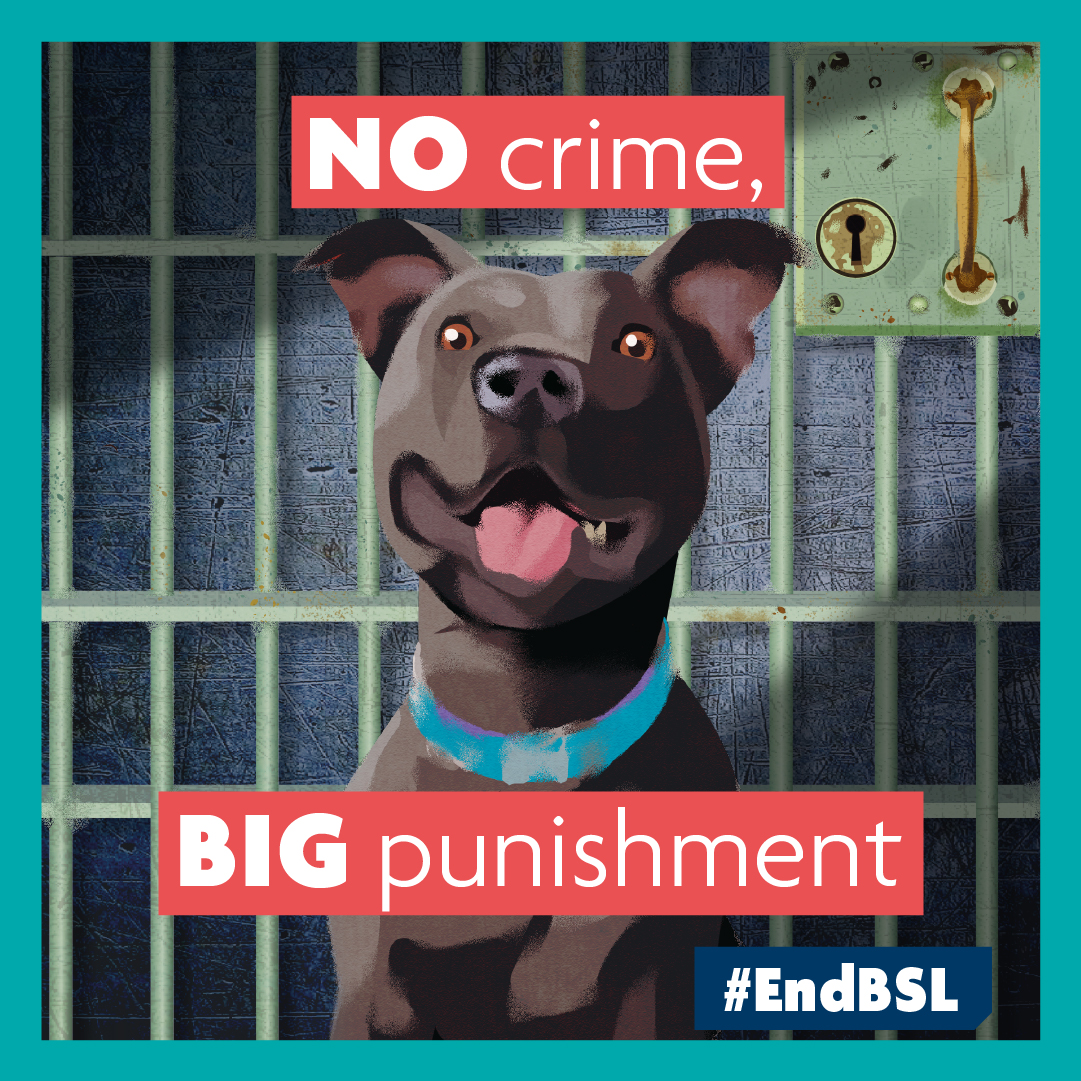 British Veterinary Association president Justine Shotton said: “A complete overhaul of the 1991 Dangerous Dogs Act is urgently needed. Blanket targeting of specific breeds rather than tackling the root causes of why dogs act in an aggressive way gives a false and dangerous impression that dogs not on the banned list are ‘safe’ - this fails to properly protect the public or safeguard dog welfare.

“We are disappointed that despite the findings of last year’s independent report by the University of Middlesex, the Government has failed to include a review of breed-specific legislation as part of its ongoing work on responsible dog ownership.”